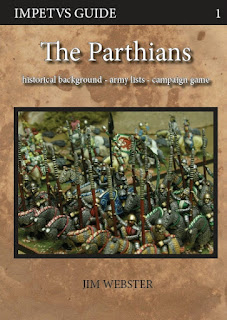 The purpose of this guide is twofold. On one hand, it is to give the interested wargamer a guide to the Parthian armies and those of their enemies and to put the armies in a historical context. For many people the Parthians are a vague presence on the eastern edge of the world. As this guide shows, they were really a bridge between civilisations, linking Rome with India, acting as a barrier to nomadic tribes moving westwards and even having some contact with China.
The second purpose is to offer up some army lists (designed to fit with Impetus rules but easy to follow and equally easily converted for other wargames rules) to help those wargamers who use Impetus and who want to field the armies described in the guide. The idea is that the lists will enable you to produce an army which is reasonably authentic and as much as possible has some of the strengths and weaknesses of the original.

This guide also provides a simple campaign to help players use their armies within their historical context.
17 full-color pages, pdf.

The pdf is available through
Wargames Vault (in pounds) LINK
and Ganesha Games (in USD) LINK
Pubblicato da losart a 6:25 AM