Extra Impetus 5 out in January 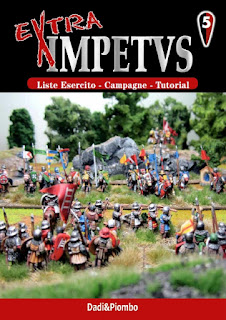 It will be focussed on the Feudal Age, covering XII-XIII armies of Europe, including the Teutonic Knights and their crusades in the Baltic area. It will cover as well the Mongols and a good selection of medieval far east armies. Also Samurai (from Feudal to XVI Cent.) will be covered with 3 lists.

Extra Impetus 5 will include also a campaign game called Rebellion. The campaign features the struggle between a king and his rebellious barons.

Pre orders will be available from the end of November. More info to come.

In the picture the draft cover of the Italian version.
Pubblicato da losart a 8:21 AM